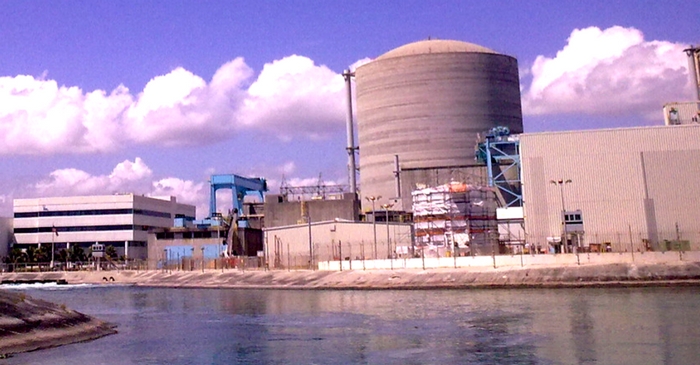 (ANTIMEDIA) Florida — Two nuclear sites in Florida are in the path of Hurricane Irma. Though the plants’ owners are confident they can withstand the storm and the facilities have withstood previous hurricanes, concerns are being raised about their durability as one of the most powerful storms ever to hit the Atlantic approaches.

The two plants in question are the Turkey Point plant near Homestead, FL, and the St. Lucie plant in Port St. Lucie. According to Peter Robbins, a spokesman for the Florida Light & Power, which owns both sites:

St. Lucie was originally designed and built decades ago to withstand flooding and hurricanes. It’s designed beyond the most severe natural disasters we’ve ever seen in the region. It’s absolutely designed to withstand extreme flooding.

According to a report by the U.S. Nuclear Regulatory Commission, St. Lucie survived with minimal significant damage. That report, published in November 2005, found:

Although the hurricanes disrupted operation of the impacted NPPs [nuclear power plants], they did not have a significant impact on nuclear safety. The reportable impacts on the NPPs were mainly confined to the three areas of complete or partial loss of offsite power (LOOP), loss of sirens, and loss of communications equipment.

Of course, the commission is tasked with keeping these facilities safe, so it’s worth considering the potential bias of a report from an entity bearing responsibility for potential damages. Nevertheless, Robbins said this week that in the aftermath of the Fukushima nuclear crisis in 2011, the industry in general “beefed up” their preparedness levels. “The industry has set up two regional response centers that have equipment that could be airlifted to a crippled nuclear plant, if necessary,” he told TC Palm. He also said they have backup generators on hand in case the reactors are shut down.

Turkey Point has also been deemed resilient against natural disasters. According to a 1993 report sponsored by  the Institute of Nuclear Power Operations and the U.S. Nuclear Regulatory Commission, Turkey Point successfully survived Category 5 Hurricane Andrew in August 1992, the plant remained stable and its “vital areas were secure and never jeopardized by the storm.”

Even so, the plant sustained $90 million in damage. A note from the NRC concluded:

The onsite damage included loss of all offsite power for more than 5 days, complete loss of communication systems, closing of the access road, and damage to the fire protection and security systems and warehouse facilities.

There was no damage to the safety-related systems except for minor water intrusion and some damage to insulation and paint, and there was no radioactive release to the environment. The units remained in a stable condition and functioned as designed.

The note also cautioned that the facilities were not designed to weather hurricane-force winds, though Robbins said this week that they have extra fuel and generators on hand, stressing Turkey Point, like St. Lucie, was safe.

Perhaps more concerning is that the Turkey Point plant’s old cooling canal system has been leaking polluted water into Biscayne Bay. The New York Times noted last year that a study found “elevated levels of salt, ammonia, phosphorous and tritium, a radioactive isotope that is found in nature but also frequently associated with nuclear power plants.”

Though the levels of tritium were reportedly too low to harm people, they were enough for scientists to determine that the plant was the source. Environmentalists worried about marine life and the plant’s owners’ slow reaction to remedy the leak. It’s unclear how a hurricane might affect the already leaking facility.

Regardless, Robbins says Florida Light & Power is prepared to shut down the sites if it looks like Irma will hit them. “If we anticipate there will be direct impacts on either factory we’ll shut down the units,” he told the Miami Herald, noting doing so is a gradual process.

According to the Herald:

In anticipation of powerful Hurricane Irma, which projections on Wednesday showed headed straight for South Florida, Florida Power & Light’s two nuclear plants were finalizing staffing plans and cleaning up the grounds. But neither Turkey Point nor the St. Lucie plant farther up the coast had made the call yet to shutting down the plants.

Continue Reading
You may also like…
Related Topics:nuclear plants