New discoveries from NASA’s Hubble Space Telescope shows how weather and seasons operate on other planets. A project called the Outer Planet Atmospheres Legacy (OPAL) has focused its attention on the weather on Uranus and Neptune.

On these planets, weather works much differently than it does here on earth. Due to the unique spin of their axis, their varied distance from the sun, and numerous other unknown factors, seasons can last for decades on these planets. Storms can also be much larger and intense than here on earth as well.

A press release from the Hubble team explains the photos:

The two major planets beyond Saturn have only been visited once by a spacecraft, albeit briefly. NASA’s Voyager 2 spacecraft swung by Uranus in 1986, and Neptune in 1989. Our robotic deep-space tourist snapped the only close-up, detailed images of these monstrous worlds. For Neptune, the images revealed a planet with a dynamic atmosphere with two mysterious dark vortices. Uranus, however, appeared featureless. But these views were only brief snapshots. They couldn’t capture how the planets’ atmospheres change over time, any more than a single snapshot of Earth could tell meteorologists about weather behavior. And, they go through protracted seasonal changes in their multi-decades-long orbits. Ever since the Voyager encounter, the Hubble Space Telescope has provided an opportunity to monitor these worlds like a diligent weatherman.

Researchers have discovered that Uranus has a polar vortex that covers most of the planet’s north pole. The polar vortex looks like a large bright cloud through the Hubble Space Telescope. Uranus has a strange axis, which causes the massive polar vortex, but also results in a summer where the sun never sets on the planet’s north pole. The telescope has also found a compact methane-ice cloud, which is also situated near the polar cap. 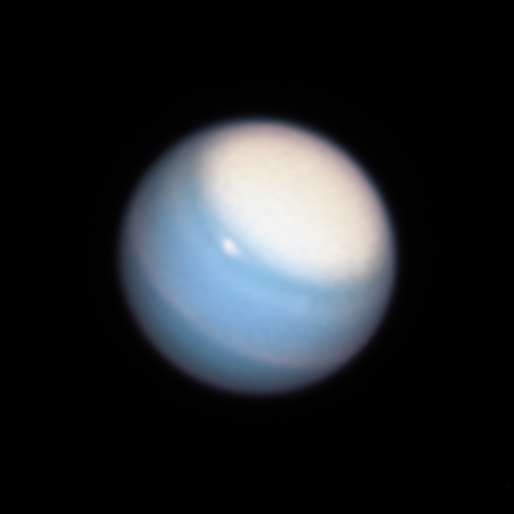 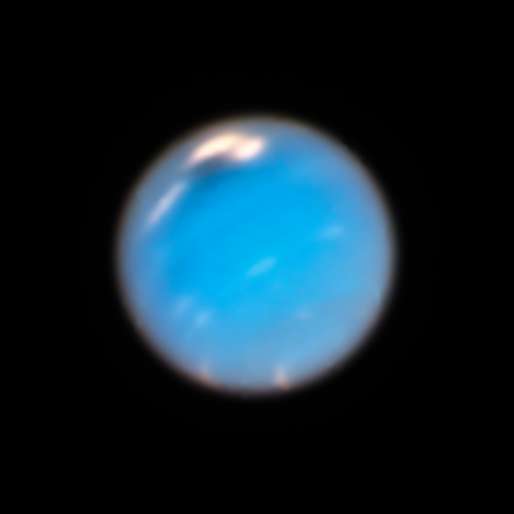 Hubble image of Neptune, taken in 2018. NASA, ESA, and A. Simon (NASA Goddard Space Flight Center), and M. Wong and A. Hsu (University of California, Berkeley)

On Neptune, the telescope was has found numerous dark storms that linger on the planet, the storms appear as dark vortexes. The largest of the storms is an estimated 11,000 kilometers or 6,800 miles across. Both of the planets are classified as ice giants, which means that they have no solid land aside from ice have a thick atmosphere.

To the right of the dark feature are bright white “companion clouds.” Hubble has observed similar clouds accompanying previous vortices. The bright clouds form when the flow of ambient air is perturbed and diverted upward over the dark vortex, causing gases to freeze into methane ice crystals. These clouds are similar to clouds that appear as pancake-shaped features when air is pushed over mountains on Earth (though Neptune has no solid surface). The long, thin cloud to the left of the dark spot is a transient feature that is not part of the storm system.

The Outer Planet Atmospheres Legacy (OPAL) project is led by Amy Simon of NASA’s Goddard Space Flight Center in Greenbelt, Maryland. The OPAL team collects global maps of the entire solar system by getting shots of the planets as they pass close to earth’s orbit.

These new findings are notable because it is the first time that the Hubble has spotted a mysterious dark vortex since 1993. A study led by University of California, Berkeley, student Andrew Hsu predicted that these dark spots are very rare, appearing only every four to six years. He also pointed out that since these spots appear at different latitudes they are harder to find.

Researchers say that by studying the weather on these planets also will help scientists better understand how weather patterns work here on earth.

“Since Hubble’s launch in 1990, astronomers have used it to amass an album of outer planet images. Yearly monitoring of these giant worlds is now allowing astronomers to study long-term seasonal changes, as well as capture transitory weather patterns,” according to the press release.

Hubble’s was first launched and deployed in April 1990. The famous telescope was named after the American astronomer Edwin Hubble.

The Hubble Space Telescope was also in the news this week for an image taken of The Whirlpool Galaxy, also known as Messier 51 or M51.

You can keep up with all of the interesting new discoveries at http://hubblesite.org/